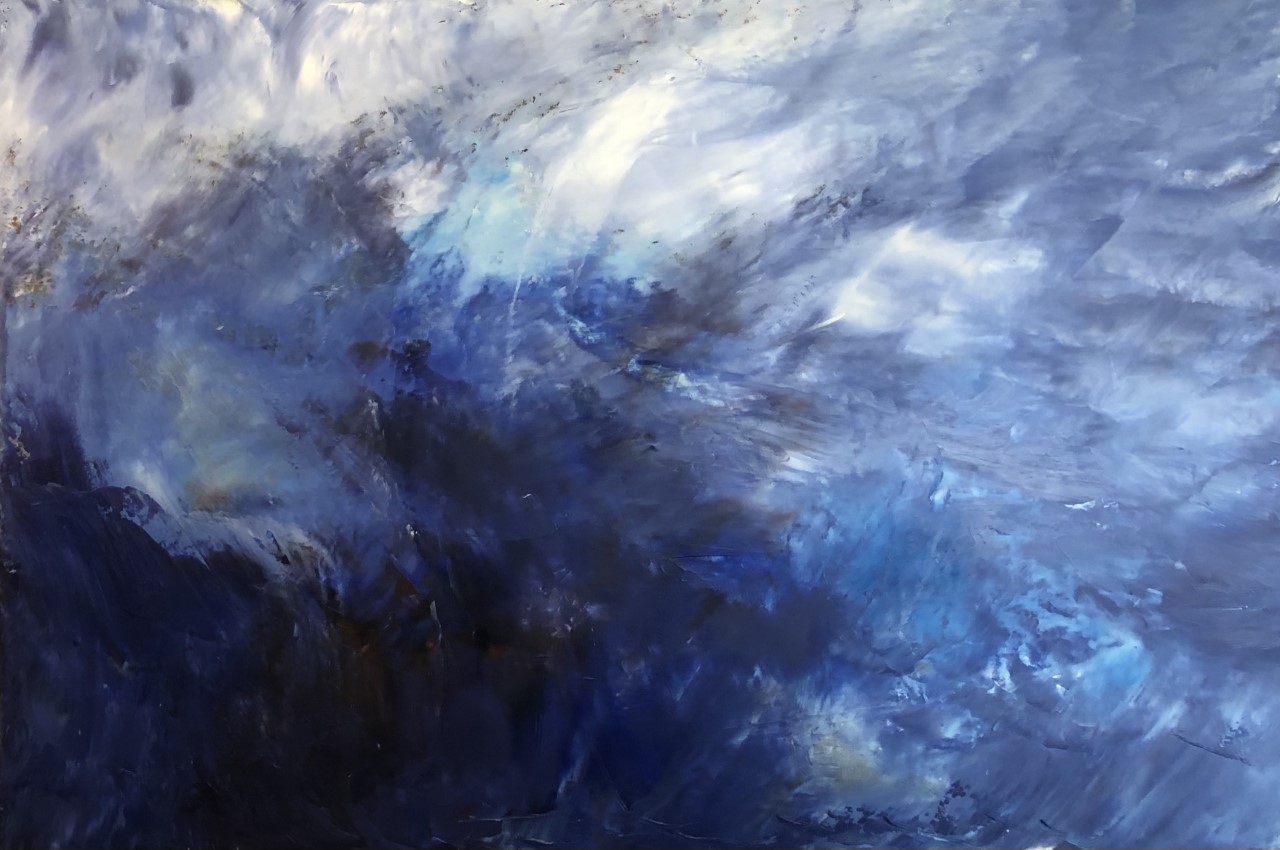 On a fair summer day, looking out at the expanse of water between Luing Island and the Isle of Mull, surely one of the most stunning views in the Inner Hebrides, there is not a more peaceful sight in all the world. The water can appear so blue, the sky so clear, you’d swear your eyes are lying to you. But this time of year, in the deep of winter, when the water is grey, and the skies are grey, and the slate beaches lie dark and dull, when even the feldspar in the granite cliffs fails to catch any light, and the har rolls in from the North Atlantic, the same waters that on that fair summer day enjoined us to set sail, warn even the bravest sailors to make for a safe harbor.

Those who love the big waters of the world, whether great rivers, Great Lakes, gulfs or seas, love them as much for their power as for their beauty.

In the old graveyard atop Luing Island, there are many things to see. Carved into the long-abandoned church building, roofless to the weather, covered in vines, you’ll find primitive, but accurate depictions of the Viking longships that once raided this coast. There’s a headstone near the old church building belonging to a member of the Campbell clan who was a devoted Covenanter, that long-extinct sect of “the bloodiest-minded fanatics” that ever roamed Scotland (and that’s saying something!). Old Alexander Campbell’s stone is huge and carved on both sides warning hellfire and eternal damnation to anyone who disturbs his grave. But the reason I return to this graveyard from time to time is because of a memorial there to a couple of dozen Polish merchant marines who drowned within swimming distance of the shore of Luing during the Second World War when their ship went down in a gale.

Far away from home, they likely were seeking shelter from the storm which was raging in the open ocean. Perhaps they hoped to make Oban, some twenty miles up the coast, with its sheltered harbor. Strangers sought them in the waves, but rescue quickly became recovery of bodies. And strangers buried them among their own families in a graveyard few of the families of the Polish seamen would ever visit. Of all the haunting stories I’ve heard in Scotland of castles and their green ladies and women in black and card games played behind secret walls with the devil, the story that haunts me most is of these men who went down to the sea in ships, as the Psalms say, to ply their trade upon the waters, but who never came home.

Over twenty years ago, on one of the travel seminars to Scotland that I conducted for the seminary, our group had risen early in the morning to catch the ferry to Mull, and then to catch a bus across Mull to Iona. I suppose I should say about now that the travel seminar was in January. And when we got to Fionnphort to catch the small ferry across the strait between Mull and Iona, the ferryman shouted from his boat that the sea was too rough, the waves too high, to risk crossing then. He would make for a safe anchorage and try again to pick us up in two hours.

When two hours passed, he brought his ferry round, but shouted to me, that he would only be able to pull up to the loading area for a couple of minutes to load the one car waiting and my group, and would have to immediately sail. Standing in water, I herded our group toward the ferry, the wind howling like death itself. One of the students ran up to me and asked, “Michael, is it safe to cross?” to which I answered, “This isn’t a ride at Disneyland. This is the Atlantic Ocean. If you don’t want to take the risk, stay in the pub and we’ll be back in four hours.”

As the student scampered onto the ferry, I knew that if she knew what I knew about the strait between Mull and Iona, she would have run back to the pub.

At a dinner at one of the colleges at Oxford a year or so before that trip, over sherry, a don at the college told me that just the prior winter every young man on Iona had drowned returning home from a dance on Mull as they tried to cross that narrow strait home to Iona. Young men to whom the sea was a second home, who had their sea legs as soon as they could toddle, were lost to the waves and the storm.

The phrase that is the title for this blog comes from the ballad Gordon Lightfoot wrote and sang about the sinking of the Edmund Fitzgerald in 1975 in Lake Superior. “Does anyone know where the love of God goes when the waves turn the minutes to hours?”

There are a lot of ways to ask the question about God’s relationship to suffering in the world, but that phrase may just be the most eloquent I’ve ever heard. It doesn’t ask the question of theodicy abstractly. It doesn’t rattle off figures about numbers of the dead. It evokes the plight of a person who knows what to do and how to do it, who respects the elements around them, but who is helpless in the teeth of nature untethered in all her fury, and who finds himself dragged under the waves.

As a painter, I often return to the sea and to the storm, because this speak so plainly of what it means to recognize that the beauty and the terror of being are ultimately inseparable. And I am pursued by that question Lightfoot asked with his matchless eloquence: “Does anyone know where the love of God goes when the waves turn the minutes to hours?”

I would risk a reply. I believe the love of God goes down with the ship, just as the legends captured in the creed have it that Jesus descended into hell, for if we go down to the depths, behold, God is there. And nothing can separate his love from us.

*From Gordon Lightfoot, “The Wreck of the Edmund Fitzgerald.”