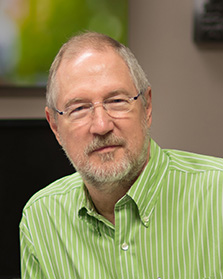 A South Carolina native, Steven holds bachelors’ and masters’ degrees in organ performance from Winthrop University in Rock Hill, SC, where he studied organ with David Lowry and choral conducting with Robert Edgerton. Other teachers and persons of influence in teaching and in masterclass settings have included Larry Smith, Jess Casey, Arthur Poister and Joan Lippincott.

Steven has been Director of Music/Organist at SCAPC since 1986. Besides his official musical duties he has worn a number of hats during his time here. An admitted computer geek, his other duties-as-assumed include 13 years as editor of the church’s newsletter The View from St. Charles, 10 years as editor and producer of the worship bulletins. Since 1991, he has acted as the church’s IT administrator; and in 1993 established the church’s website (the first church-related site in the area).

His first love, his musical family, and his Instrument of Choice is the SCAPC Chancel Choir, with which he has enjoyed many years of fine music-making! Children’s choirs, youth choirs, bell choirs, recorder ensembles, small vocal ensembles, chamber orchestras, classes in music appreciation, history, singing for the tonally challenged, have all been a part of Steven’s program here at this home that he lovingly refers to as “St. Chuck”.